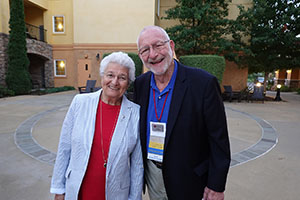 The TMA family mourns the loss of a great man, Robert “Bob” Bitton, Supreme Security Systems. Loved and respected by many, he dedicated much of his time over four decades to the advancement of TMA’s mission, its members, and others industry-wide.

He served as president of TMA (then CSAA) from 1987-1989, and continued to serve on the TMA Board until his death. Until very recently, he’d been coordinating the radio frequencies that had been designated by the FCC exclusively for the use of UL listed central station alarm companies, a role he graciously assumed in 1989. He leaves a distinct legacy of leadership and altruism.

Our heartfelt condolences to his family and colleagues.

We are collecting remembrances about Bob to place on this Tribute page. If you would care to contribute stories, thoughts, memories about Bob, please send them to lmcguire@tma.us.

Robert Bitton, 81, of Naples, Fla., died after a courageous and short battle with brain cancer, at home on July 9th, 2020. He was born January 19th, 1939 at Beth Israel Hospital in Newark, NJ, the son of Sydney and Bertha (Rabkin) Bitton.

Robert graduated from Hillside High School, Class of 1956 and Rutgers University, class of 1960. After graduation, he married Rhoda Heiber and they lived in Union, NJ and Clark NJ before moving to Livingston, NJ. They celebrated 60 years of marriage on June 11th, 2020.

Robert was CEO of Supreme Security Systems, Inc., started by his father Sydney Bitton in 1929, until 2019 when he passed the operations on to his son David Bitton to establish a third generation family business. Robert was a prominent figure within the electronic security industry, serving as a leader for many different organizations. He also loved to spend his time on the water, boating.
Graveside services for family only took place on Sunday, July 12th at King Solomon Cemetery, Clifton, NJ. Those who wish to remember Bob, may make a donation to the charity of their choice.

“Bob was fiercely passionate about our industry.   He was a true believer in the power of associations and collaboration and would always have time for people , myself included. H is work for years on wireline , wireless and FCC frequency coordination was priceless. The industry has lost a wonderful soul and we are all in a better place because of his lifelong efforts.. He would often brag with pride in a positive way how long he was a member of CSAA/TMA. Bob will be missed by many; however, his positive impact will hold true for years to come.”

“Bob Bitton was one of the 3 “BBs” in the association along with Bob Bonifas and me, Bob Bean. He was President of CSAA when I joined and at my first conference which was on the Island of Kauai and he welcomed me and Alert Alarm with enthusiasm and warmth as did Rhoda. I liked Bob. He was great for the industry and the association. He will be missed. Aloha.

“I did not know Bob as well as others, but seeing him often at board meetings and other events always reminded me of the commitment our founders have had to this association for so many years. Bob will certainly be remembered fondly by our TMA family and I personally look forward to learning more about him from the memories of our members in the future. Indeed, may Bob rest in peace.”

“Dedicated, passionate, insightful, and inquisitive are amongst the many qualities I attribute to Bob. A great Industry person, always concerned and always questioning, Bob was a friend, a leader and a real mensch. His presence will be greatly missed. I am proud to work in an industry and proud to be a member of TMA which allowed me to learn from people like Bob.”

“I always enjoyed my conversations with Bob over the years.  Being local in New Jersey made it easy to meet or speak from time to time about a variety of subjects.  His decades of experience was priceless and his ability to make the tough decision when necessary was an essential part of  his success.  I was so sad to hear of Bob’s passing but glad we had time to have a few laughs with Bob & Rhoda recently at the TMA Annual Meeting this past October.”

“All the years I have spent on the the TMA BOD, Bob has always been there for me.

My wife Sue and I will always remember the great times we have spent with Bob and Rhoda. Our heart’s also  go out the the Bitton family.”

Look for a memorial in the summer issue of TMA Dispatch.