Bud and Laurie Wulforst with the Lott Award, October 2018. Photo by Ralph Sevinor.

TMA Past President Bud Wulforst was announced as a new recipient of the association’s highest honor, the Stanley C. Lott Memorial Award for Exemplary Service, at the 2018 Annual Meeting. This award was created to honor the memory of Lott, renowned for his efforts to lead and financially support the Association through difficult times.

Wulforst, with more than half-a-century in the electronic security industry, built and sold five companies, most recently selling Nevada-based A-1 Security to Stanley Convergent Security Solutions. He has been devoted to the industry and its causes, helping many colleagues improve their operations and profitability, and assisted some in selling their businesses. Over the years he has been associated with more than a dozen industry-focused organizations, remaining an active member of the TMA board of directors since his presidency.

Sons Howard Wulforst and Leif Wulforst accepted the award on Wulforst’s behalf. “I finally finished the race,” said Wulforst with a smile. “When my sons told me I had received the award, I was dumbfounded – almost speechless. It’s a wonderful honor.

“I knew Stan Lott well,” he continued. “He was really a mentor to me; he encouraged me to join the association back in the late 80s, and explained how things worked – it was very helpful! It’s truly an honor to join the others who have received this award named for Stan.”

“It was indeed an honor to present Bud with the Lott Award in Palm Beach this year,” said TMA President Ivan Spector. “Bud leads with a quiet and determined leadership style – always very low key and spot on with his advice and comments. He is very insightful, always helpful and never says no to assisting on various projects. He is one of the reasons why TMA is so successful — both in the past and in mentoring new Industry leaders of the future.” 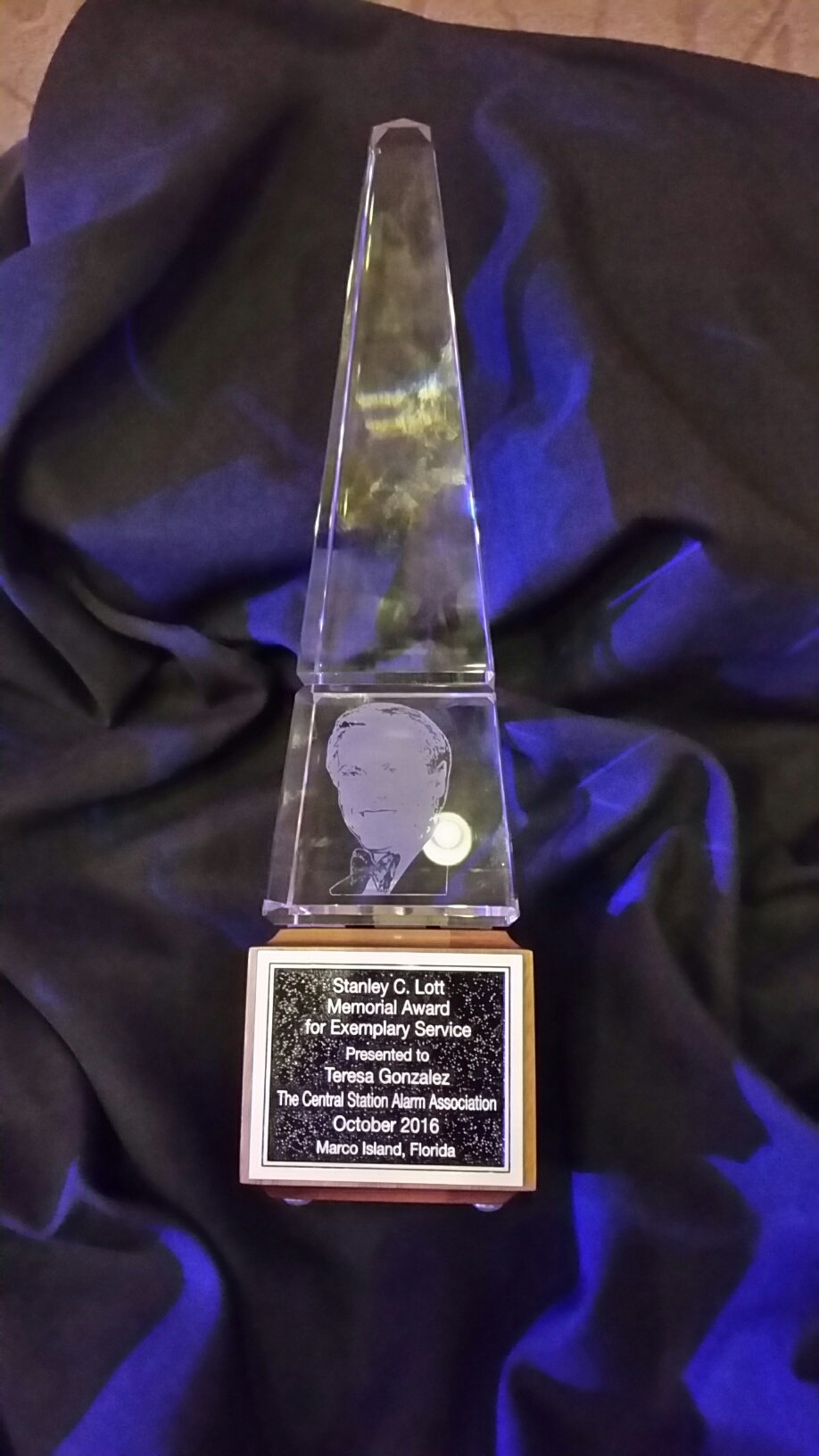 This award was created to honor the memory of Stanley C. Lott, a CSAA past president renowned for his above-and-beyond efforts to lead and financially support the Association through difficult times.

“On behalf of CSAA, I am thrilled that Teresa has been selected as the recipient of the 2016 Stanley C. Lott Award,” said Pamela J. Petrow, president of CSAA. “This award is not presented each year, but reserved for the very special recognition of individuals who have made significant contributions to the security industry over an extended period of time. Teresa’s efforts distinguish her among the volunteers who move CSAA forward — this award is well deserved.”

Teresa Gonzalez has 25 years of experience in central station operations and technology, including 15 years managing personnel, business operations and technical advancements in the central station.  She joined UCC in 1997 and served as UCC Vice President and General Manager until being promoted to President in 2008. She is a member of the CSAA Board of Directors and a Co-Chair of the CSAA Education Committee.

“I am very humbled and honored to have been selected to receive this award,” said Gonzalez. “It is definitely an unexpected but pleasant surprise! Over the last 15 years, it has been a gratifying experience to work with and share ideas with other CSAA members who are passionate about this industry and its professionalism, especially all those who have contributed to the education committee over the years. I also feel fortunate to have had the opportunity to learn from so many great leaders at CSAA. I am grateful to them for their support and friendship.”

As chair of the CSAA Education Committee, Gonzalez has been a driving force behind creating and updating CSAA’s educational content, one of the Association’s most important programs. “Be it upgrades to existing programs, such as the Distance Learning Programs for frontline staff, or bringing in relevant speakers for the Fall Operations Conference and CSAA Annual Meeting, Teresa’s vision has been critical in our effort to create relevant content that our business members can use to improve performance and bottom line results,” said Petrow. “As we have been working to advance CSAA, her work in the area of education has significantly contributed to our success.”

“It’s an exciting time to be a part of CSAA,” said Gonzalez. “Under the leadership of President Pam Petrow, Executive Director Jay Hauhn, and all the support staff, CSAA has had new direction and positive change. Board members have a renewed commitment of participation, a common goal and desire to re-create value and relevance for our members, and to continue the furtherance of professionalism in our industry. I am proud and thankful to work with such exceptional people.”

Find out more about the Stanley C. Lott Award and view the list of recipients since 1991 at http://csaaintl.org/stanley-c-lott-award/.